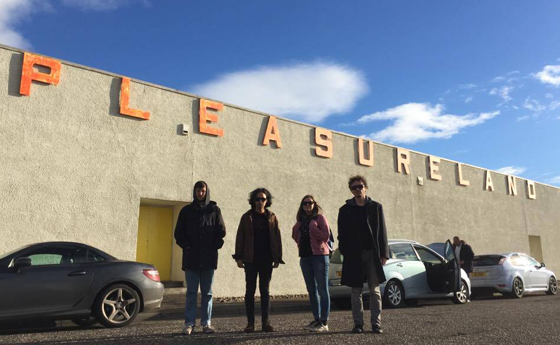 Rising from the smouldering ashes of psychedelic indie punks The Yawns, Lush Purr owes its existence to Glasgow. Brothers Gavin (guitar/vocals) and Rikki Will (drums) came from a small fishing village near Aberdeen; Emma Smith (bass/vocals) grew up in Doune, near Stirling; and Andres Fazio (synths/guitar) moved to Glasgow from Santiago, Chile. All four chose the city to be their home, attracted by its famed music scene. Glasgow is the place where all four of them met and Lush Purr was born.

Following the untimely demise of The Yawns, Gavin Will continued to make solo demos under the name Squirls. When former bandmates Rikki and Emma stepped in, they settled on the new name Lush Purr and started looking for a synth player. Pretty soon, Andres (formerly of Mirror Parties) responded to Gavin’s Facebook ad, making the current line up complete. Within a year, the band were releasing a debut on cassette via Fuzzkill/Electropapknit Records. Their new off-kilter lo-fi sound resulted in a series of glowing reviews, successful UK tour and a Best Newcomer nomination at the Scottish Alternative Music Music Awards (SAMA).

Melancholy humour, dreamy lo-fi noise pop, meandering psychedelic fuzz are all signature elements of Lush Purr’s musical code. It’s unpredictable, fresh, melodic and at times very loud. And with song titles like '(I admit it) I’m a Gardener' and 'Jamiroquai at The Karaoke' you’re left in no doubt about their darkly strange sense of humour.